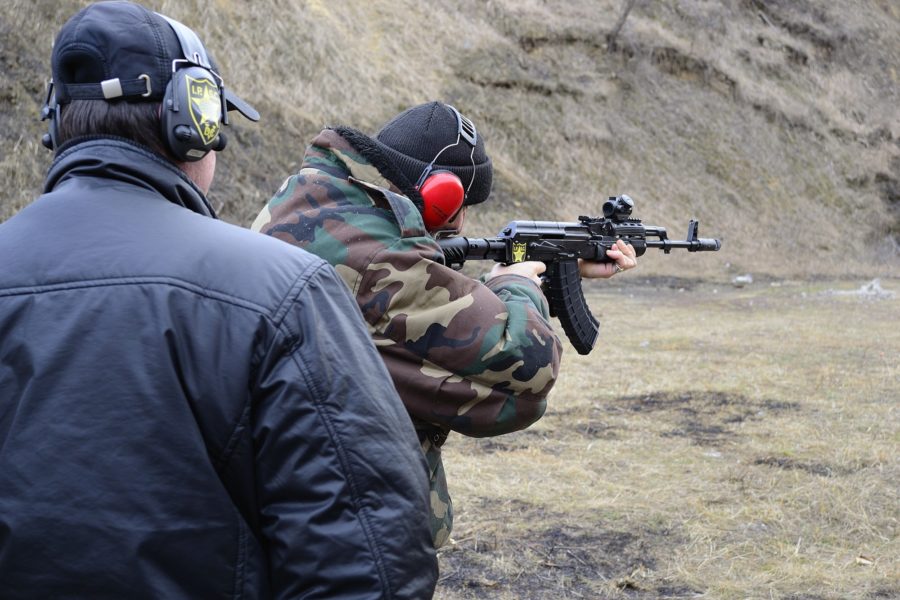 Shooting sports have remained an integral part of American competitive culture for decades. But there’s one variation in particular that has built considerable attraction in the last few years.

It’s known as a 3 gun competition, and though you might have heard the name, you may not know what this variant entails. That’s why we’ve written this detailed guide on all things 3 gun competition.

What Is a 3 Gun Competition?

A 3 gun competition is a specific form of shooting competition, whereby individuals compete to prove their accuracy, speed, and precision at shooting firearms.

In this respect, they’re like the triathlon of shooting competitions across America. Other similar variations include the 2 gun competition which, as you might expect, is a competition designed for 2 guns rather than 3.

Before we go into more detail regarding the competition rules and set-up, allow us first to divulge the three guns used in a 3 gun competition.

Which Guns Do People Use in a 3 Gun Competition?

There are three main gun variations used in these competitions, and though the models and specifications of the guns you use may differ, they must fit into these three distinct categories. These are:

Those are the 3 guns involved in any 3 gun competition. But each shooter will bring their own guns to the competition, meaning everyone could have a different set-up.

This is fine as long as you have one of each gun type, though there are certain rules dependent on the set-up of the game itself, which we’ll get into below. When competing you’ll need to remember certain accessories also.

This includes spare magazines, protection for your eyes and ears, quality holsters and gun oil to use between rounds.

Choosing the right weaponry is the hardest part of competing in a 3 gun competition, as choosing poorly can put you at a distinct disadvantage. If you need help sourcing your guns, check out this post on finding firearms for competition shooting.

What Divisions Are There in Multigun and 3 Gun Competitions?

As we mentioned above, the ability for you to bring certain firearms to compete will depend on the style and division of the competition. Some of the main variations to remember are:

Limited Division is your entry-level 3 gun competition style and has very low equipment requirements. Each competitor can have a single optic on their rifle, with no modifications to the shotgun or pistol. If you’re new to the sport, this is where you should be looking to start.

Tactical Division is perhaps the most popular 3 gun competition type, and it involves a lot of tough competition. The difference with a tactical division is that you’re allowed an extended magazine on your shotgun as well as the aforementioned optic for your rifle.

Open division competitions are, for the most part, without rules as long as you compete safely. You’re allowed to customize your firearms to a greater extent here, with options such as speed-loaders for shotguns sometimes allowed.

If you are looking to compete, make sure to check the rules of entry for your competition before you bring your guns along. The rules are there to ensure fair play as well as safety between competitors, so don’t be surprised if you’re refused entry if you don’t meet them.

What Happens During a 3 Gun Competition?

Now you know the guns involved and some of the many divisions, let’s talk about what is actually involved in a competition.

3 gun competitions are a hybridized form of competition that combines shooting range stages with assault course physical activities. The specificity of every competition will be different, as the layout will have been decided by the organizer.

In general, you should expect many different shooting ranges with a number of targets that you’ll need to hit quickly and accurately before continuing. Between these sections, you’ll find tests of physicality and strength.

This could include walls you need to navigate, windows to hurdle, barrels to fight through, and more. Think Ninja Warrior with AR-45s; sounds fun right!? Certain stages will be designed to encourage you to switch between your firearms to hit every target.

The entire run will be timed, including the shooting ranges as well as the sections in-between. Your final time of completing the entire course will then be used to place you compared with others, with the fastest time signaling the winner of the competition.

With a 3 gun competition, you should enter expecting the unexpected. Every organizer will have conceptualized their own course, which may feature obstacles you’ve never encountered before.

This is what makes the competition exciting, as each course will be completely different from the last. There are however some tips and tricks to remember if you plan on entering a 3 gun competition in the future.

Tips and Tricks to Competing in a 3 Gun Competition

First of all, if you’re competing make sure you’ve purchased and brought the appropriate firearms with you. You don’t need to spend thousands of dollars on high-spec equipment at first, but you should have read the rules and assessed what guns will meet the criteria for entry.

Before starting each stage of a competition you’re able to walk-through the layout of the course. This is the most important part of the competition, as you need to visualize how to tackle each section as quickly as possible.

Focus on how you’ll transition between guns, which targets to hit first, and how to tackle some of the more complicated obstacles. If you visualize all of this during the walk-through, it’ll be quicker to accomplish when you finally run the gauntlet.

A good trip is to use obstacles as gun rests where possible. This helps by both resting your arms and steadying your aim.

Try not to get in your head too much; everyone panics at first and aims for speed over precision. You don’t want to aim for a blisteringly fast run, you want to aim for smoothness.

That way, you’re still hitting your targets, you’re just not moving at a speed that’s too quick to keep up with.

It can be hard to practice for 3 gun competitions because you don’t know what obstacles will be in front of you. However, you can practice your aim and your cardio before a competition.

You should also take the time to work on your reload speed. This is where a lot of time can be cut down on a run, particularly when it comes to shotgun reloading. Think about how fast F1 mechanics change tires; you should be aiming for that speed and precision every time you reload.

Where Can I Find a 3 Gun Competition?

3 gun competitions are held all across the U.S., with some of the larger events attracting sponsorship and large purses. Ask around gun stores in your local area to see if there are any upcoming events, and inform them of your interest.

It can be intimidating at first, but remember a 3 gun competition is designed to be safe and fun. Though there are professionals, you should join for the fun of it, then consider how you can climb up the ranks.

If you want to find out more about 3 gun competitions, make sure to browse through some of the previous posts on our website. Try looking in our Entertainment or Sports sections where you’ll find everything you need to know about competitions across America.