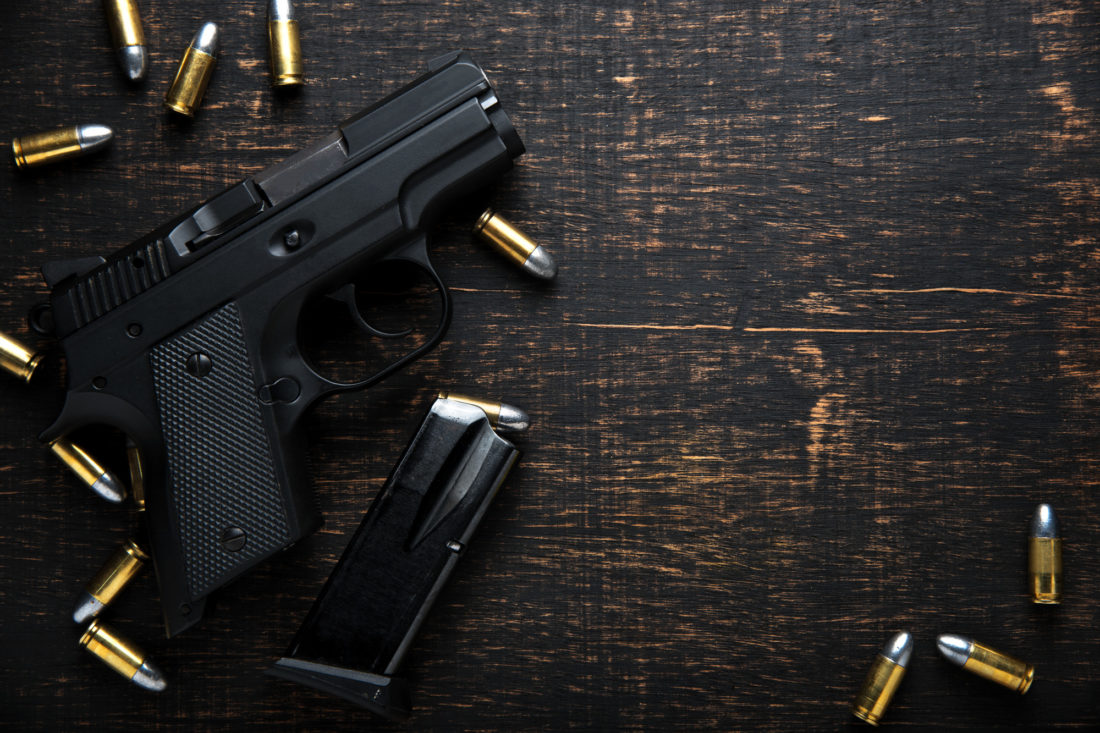 Guns have always been a fascinating subject. Whether you are a hobbyist, a hunter, or are looking to protect yourself and your family, you should do yourself a favor and learn about the different types of guns available.

They are a huge part of American life and something that should be studied carefully.

So how do guns work? How do you go about choosing the best gun for you?

In this comprehensive guide, we will show you what the different types of guns are so you can decide for yourself.

The Guide to Different Types of Guns

Whether you are a seasoned gun owner or are looking to make your first purchase, you want to understand the intricacies of each gun.

But first, let’s try to understand what a gun is.

What is a Gun?

The U.S. Bureau of Alcohol, Tobacco, Firearms, and Explosives broadly defines a firearm as, a weapon that is able to discharge a projectile (bullets, rockets, missiles) by an explosive.

This leads the definition of a gun (or a firearm) to be rather broad. It means that a potato cannon is as much a gun like an AK-47 is.

Guns have cartridges where bullets are stored. These cartridges are categorized by their caliber.

The caliber determines the size (in inches or millimeters) of the ammunition. It also determines what the bullets can be used for. For example, if you are hunting at long range, you may wish to stock up on 223 ammo which has traditionally be used for small-game hunters and attacking varmint.

When choosing your gun, you can consult with the owner or gun shop expert on what the caliber of the gun is used for.

Next, let’s look at the different types of guns available:

This is a simple type of rifle. This is a slow-firing gun as it requires the shooter to first push a bolt forward before squeezing the gun’s trigger.

After the rifle has been fired, the shooter has to release the empty cartridge and then push the bolt forward once more to load the cartridge.

While these may be slow, they are very accurate for firing and remains a favorite among hunters. If you find yourself in a forest with a group of buddies, this rifle is the perfect companion for a hunting weekend.

You may have seen these rifles in some of your favorite Western films. Like the Bolt Action Rifle, you have to pull a lever to load the cartridge and then you fire the rifle.

However, with this rifle, you are able to fire bullets much faster in comparison to the Bolt Action Rifle.

The most popular models for this type of rifle include the Marlin 336 and Winchester 94.

We’re willing to bet this was the one you were most curious about. With the prevalence of mass shootings in the United States, there have been discussions on whether the personal ownership of semi-automatic guns should be banned.

There are various types of semi-automatic rifles, so defining them specifically is a challenge.

A common feature is that the bullet rounds are automatically reloaded. This is in complete contrast with the Bolt Action Rifles and Lever Action Rifles that require manual loading and are, therefore, slower for firing.

The Browning BAR rifle and the AR-15 are popular examples of semi-automatic rifles.

You probably know what a shotgun is as they have always been one of the most popular firearms available.

These guns are instantly recognizable due to their long barrels. Within these barrels, the pellets (called “shots” and made out of steel or lead) travel at a rapid speed.

Shotguns can come in different varieties, from being able to fire a single shot to several shots at once. There is a category of shotguns that would fall in the semi-automatic description.

Two popular models for shotguns are the Remington 870 and Mossberg 500.

Like Lever Action Rifles, these revolvers are a staple of the Cowboy roaming through the Wild West.

These are small handguns and work well for firing several shots. A revolver can store up to seven bullets within a revolving cylinder. As a result, most modern revolvers are considered to be semi-automatic weapons.

One of the most popular revolvers available is the Smith and Wesson Model 686. Revolvers are more suited for self-defense. If you are looking for a gun for self-defense you may wish to consider purchasing a revolver.

This is the most popular type of handgun available. Unlike the revolver, a pistol gun does not have a revolving cylinder. Instead, bullets are stored in cartridges. There are single-shot pistols available, though multi-shot pistols are far more popular.

This latter type of pistol is considered to be a semi-automatic weapon. The cartridge is stored in the grip and has to be removed and reloaded manually.

Most modern pistols can hold up to 17 rounds in a cartridge. If you are looking for a great weapon for defending yourself, a pistol is a great option.

The most popular pistols include Glock 17, Sig P320, and the M17 Modular Handgun System.

Now that you know the different types of guns, let us look deeper into some of the misconceptions about guns, how to use a gun safely, and where to purchase a gun of your choice.

As we mentioned previously, there has been a lot of discussion surrounding semi-automatic weapons in the United States. The horrific mass shootings have led to debates on whether they should be banned.

We have also seen the interchanging use of “automatic” and “semi-automatic” when describing guns.

Let’s breakdown what these two terms mean and how they compare and contrast.

In short, automatic guns allow for continuous firing once the trigger is being squeezed. The firing only stops if the shooter lets go of the trigger or when the supply of bullets in the magazine is exhausted.

It is rare, in the United States, for a citizen to own an automatic gun. Owning these guns are also heavily regulated by the government.

These guns are legal in all 50 states. When firing a semi-automatic gun, the shooter has to release the trigger before squeezing it once again. If the trigger remains depressed, it will not continuously fire more bullets.

However, while the bump stock mechanism can still increase the rate of fire, it still requires the trigger to be squeezed and released to fire. It doesn’t allow the trigger to remain depressed in order to fire continuously.

Whether you have never fired a gun before or are a gun enthusiast, it is always important to review gun safety.

Most likely, you will be purchasing a modern firearm. And most modern firearms have mechanisms to prevent you from accidentally firing it. You may have heard off “having to take the gun off safety” before firing – this is what the mechanism refers to.

Some guns will have a lever that has to be positioned. Once the lever is in its position, you will be unable to fire the gun as long as it remains in that position. Other guns will have internal mechanisms to prevent the gun from misfiring if it is accidentally dropped.

Nevertheless, even with the safety mechanisms, every gun owner must follow the safety tips to practice responsible gun ownership.

There are four rules that every gun owner should abide by:

You should always assume that every gun is loaded. Even if it is your gun and you did not load it, it is suggested that you assume it is loaded. You should go with the presumption that someone else could have loaded the gun without your knowledge.

While this may sound absurd at times, it is always better to be safe than sorry. If a gun is handed to you, you should always assume that it is fully loaded.

You should inspect the gun to see if the revolving cylinder/magazine/cartridge is full. Before you do, make sure that the safety mechanism is activated.

2. Watch Where You Point

It is gun etiquette to never point the gun at someone. The gun could accidentally be fired and if you did not check if it was loaded, then you are in trouble.

As a result, the rule is that you should always watch where you point the gun. Ideally, point the gun downwards and away from your feet, away from others (including pets) to make sure that in the event of negligence, no one is hurt.

When handing your gun to someone, it is best to point downward and hand it to them.

Another example of negligent gun use is always having your finger on the trigger. In the blink of an eye, you may accidentally press the trigger and fire a shot.

While this sounds like common sense, many gun owners, new and experienced, automatically place their finger on the trigger instinctively.

Even if you are responsible, even if someone slightly bumps into you it may cause you to press the trigger. Keep your finger around the grip of a pistol, for example, and only place your finger on the trigger when you are finished aiming.

Once you have a gun in your hand, you have something that can take a human life. You are putting yourself and others at risk when you are in possession of a gun.

As a result, you must always be aware of your surroundings. You must make sure that there are no safety hazards between you and your targets. If you are hunting in a vast forest, you may intend to shoot an animal but may shoot a fellow hunter.

In golf, a golfer has to be aware other golfers are out of range so that they do not accidentally get hit by a golf ball. A person with a gun has to have the same attitude. You cannot multitask when you are holding a gun.

A great way to cultivate a heightened sense of awareness is to practice your shooting at a shooting range. At these ranges, you have a target in your line of vision. There will be nothing beyond this target, so you will not be able to shoot someone or something else.

The staff at the shooting range will also make sure you do not walk out of your designated area so that you do not accidentally bump into another shooter.

It is crucial to remember that guns can serve an important purpose in our lives. It can help us hunt for food, but more importantly, they can be used for defending ourselves. It is the irresponsible use of these guns that lead to tragic consequences.

Make sure you do your research on the best gun types for your needs. Ask your retailer for the different gun names and which brands are the best quality.

Now that you know the different types of guns, you are ready to stock up on the ones best suited for your needs.

Be sure to follow us and read more great content on how to live the life you want!