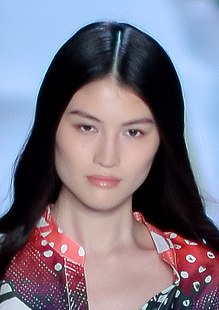 There has been a great deal of talk about the Asian fashion market for years now, with many of the magazines gushing over the sense of style and the redefinition of fashion taking place on the continent. We have seen in recent years a rise in the number of Asian models and designers that the traditional fashion houses are using, and now Japanese company Shiseido are adding to their diversity too, with the beautiful Sui He being brought on as Chinese ambassador by creative director Dick Page.

Sui He shot to fame when she became the first East Asian to walk the Ralph Lauren runway and her career has shot to the stars ever since. This role is yet another step on her way to superstardom having also featured on the 6th anniversary edition of Chinese Vogue.

When asked about the move creative director Dick Page stated that it was very much Shiseido’s belief that the consumer wants to be represented when they see models showcasing their new designs, he also acknowledged the importance of the Asian market.

“Everybody in the fashion/beauty industry recognizes the importance of global markets, and currently, China, Taiwan, and South Korea are at the forefront. The upshot is that customers want to see some version of themselves represented.”

Page went on to discuss Sui He in particular, and why the beautiful model would be the perfect fit for the company.

“Sui He is a beautiful woman, of course, but she is also graceful and intelligent with a sweet sense of humor. She wears her beauty lightly. She is a charming and a very welcome addition to the world of Shiseido.”

The move comes in the wake of the backlash which Vogue faced following their ‘Asia Major’ editorial, which many felt assumed that all Asians could be grouped together when being described, which of course is far from the case. Whilst poorly worded and certainly poorly photographed, that Vogue editorial did still resonate and much is the way in the fashion industry, many houses and designers leapt onto the Asian style and began to use many more Asian models, many of whom had been under the radar for way too long, much like He before she did the Ralph Lauren
show.

Shiseido’s creative director was very keen to stress that He will have a hands-on role in the design, creation and the marketing of the company’s range within China. This will no doubt see sales rise but it will also ensure that the stock of Sui He will rise with it, putting her front and center of the fashion industry within her homeland.

We can certainly expect to see much more of this across Asia, assuming that the move becomes a success for both He and Sheseido. All eyes are now on what He plans to do in the country and what designs in particular she will inspire from the Japanese fashion house and its creative team.