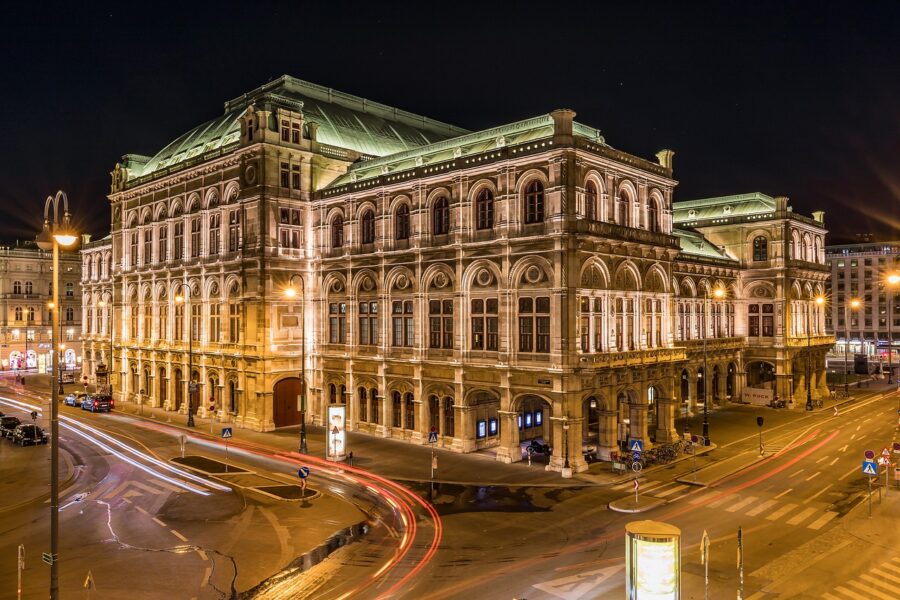 Vienna is the capital of Austria. The city is located in the eastern extremity of this federal republic, in the state of Vienna, and is crossed by the Danube (Dunăre). The autonomous region of Vienna, with its almost two million inhabitants, represents a quarter of the total population of Austria, the tenth-largest city in the European Union.

The city was for centuries the imperial capital and residence of the imperial family of Habsburg, which led to its development as one of the most important cultural and political centres of Europe. Listed as the fourth largest city in the world, with a population of two million at the time, Vienna was surpassed only by London, New York and Paris.

For many centuries, Vienna was the centre of classical music and opera. Johann Strauss-son and his family created waltzes in Vienna, and the city became the home of the so-called “Second Viennese School”, with Arnold Schönberg, Alban Berg and Anton Webern all born here. It is also the headquarters of the Viennese Philharmonic Orchestra.

Vienna is also notable for its architecture. There are many Baroque buildings, but all other styles are also represented. The summer palace of the emperors, the Schönbrunn Palace, was designed as a rival to that of Versailles, but, although huge and ornate, it did not become as large. The Schönbrunn Zoo is located inside the palace. St. Stephen’s Cathedral, built in the 12th century, is also of great value. The modern architect Friedensreich Hundertwasser built several buildings in the city in his idiosyncratic style.

Now that I have described the capital of Vienna a little, I would like to present you some of the locations that I recommend you visit when you go on a city break or even on a vacation in Vienna.

The Giant Wheel of Vienna

The Giant Wheel in the Viennese Prater is one of the symbols of the citadel. From a height of about 65 meters, the panorama of the Danube metropolis is breathtaking.

The Giant Wheel in Vienna was built in 1897, on the occasion of the 50th jubilee of the throne of Emperor Franz Josef. Since then, the image of the citadel cannot even be imagined without this wheel. Right at the beginning of the amusement park known as the Wurstelprater, a gondola offers a charming view of the city and the Prater. The diameter of the wheel is about 61 meters, and the entire iron construction weighs 430 tons. The wheel spins at a speed of 2.7 km/h.

The Giant Wheel has often played a “leading role” in Hollywood films such as “The Third Man” with Orson Wells or in James Bond’s “Iron Curtain” with Timothy Dalton. In June 2016, the European Film Academy nominated the creation in the list “Treasures of European Film Culture”.

In the entrance area of ​​the Giant Wheel, eight wagons allow a foray into the 2,000-year history of Vienna. Individual carriages can also be reserved for exclusive dinners, cocktails and weddings. Access to the Giant Wheel in Vienna is allowed all year round.

Esterházy Palace has a flair which combines relaxing atmosphere and elegance on four floors and offers you a wide range of games. At the Jackpot casino on the ground floor, the games are relaxed and casual. At the stylish casino on the upper floors, you can enjoy roulette, Black Jack, Macau Baccarat and a variety of state-of-the-art slot machines.

Freshly mixed cocktails are served at the Casino Bar. The second floor takes you into a world of lounges: fine dining is offered at the red and grey lounge of the restaurant “Cuisino” casino.

But if you can’t get to this location, don’t worry. We know that a longer time is spent in this tourist area and we thought of telling you an alternative. The same games you enjoy in the online field, the online slots games are the same as in Casino Wien having the same satisfaction and pleasure of the game itself.

The world-famous wax figure cabinet, Madame Tussauds, with over 80 wax figures and a universe of interactive Sisi experiences is the highlight of the Viennese Prater.

At Madame Tussauds, 80 wax figures can be admired on Riesenradplatz Square in the Viennese Prater. Emperor Franz Joseph and his Sisi, Wolfgang Amadeus Mozart, Falco, Maria Theresia or Gustav Klimt are just a few historical personalities and figures from Austria that you will meet on the 2,000 m² exhibition space.

Regarding Sisi: In February 2017, the new universe of “Sisi Uncovered Experience” was inaugurated, in an area of ​​200 m². The event will tell the story of Elizabeth’s unknown side, illustrating a day in the queen’s life. The very modern technique, with 3D animations and a sensory openness to smells and tastes, will guarantee a perception very close to the reality of Empress Sisi and her era.

Moreover, in the specially created interactive backstage, you can compete with Albert Einstein in an intelligence test, run the Danube Waltz with Johann Strauss or try to beat the football legend Hans Krankl in 11-meter shots. You can also admire the football star, David Alaba.

Madame Tussauds’ wax figures have fascinated audiences for over 150 years. Creating a figure can take three to six months. In order to reproduce as accurately as possible all the details and the tiniest features of a person, more than 500 accurate measurements of the character’s body and about 200 photographs are needed.