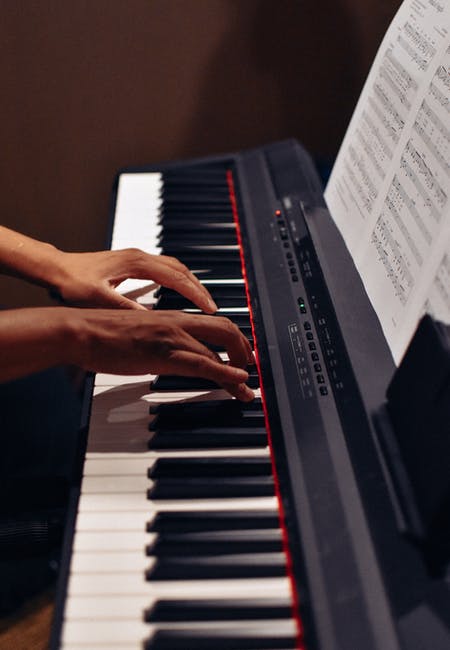 On average, it takes three to five years of practice to be able to enjoy playing the piano proficiently. But if you’re looking to just accompany yourself with chords, you can learn it rather quickly.

With the right knowledge of the make-up of piano chords and lots of practice, you can play pop chords for yourself in no time. Let’s look at how to make and recognize piano chords.

Learn Your Scales and Keys

The first step to mastering chords on the piano is to learn some basic music theory. By understanding the relationship between notes (or the intervals) you’ll be able to build chords exactly the way you want them to sound.

The first interval you’ll need to know is a half step. A half step is the key exactly one key away. So if you start on a C, a half step up is that black key also known as C#. That’s a half step.

A whole step is two keys away. So starting at C again, a whole step away is D.

C Major is the easiest to learn because you use only white keys and don’t have to worry about any sharps or flats. But you can use that major scale structure to learn any key. If you start on D, for example, the notes would be:

It follows the same pattern. Try following that pattern starting from any note on the piano.

Not all thirds sound the same. There are major thirds and minor thirds. Knowing the difference between them will be important when you go to build triads or “chords”.

You can change whether a third is major or minor simply by extending or shortening the space between them. You can do that by moving either the first or second note up or down a half step.

If you want to make D to F a major third, you need to make the space bigger. Either lower D to Db or raise F to F#. Which you do will depend on what belongs in the scale key you’re playing in.

Once you understand intervals and thirds, you can start building triads. A triad is a chord including three notes. They are the most common building blocks of chords for piano, and you can find triads in almost all popular music. There are chords with more than three notes in them, but you can get to seventh chords later unless you want to read more about them now.

There are four kinds of triads – major, minor, augmented, and diminished. And they all add a different sound quality to the music.

Major triads are made of a major third on the bottom and a minor third on top. For example, C – E – G is a major triad or a C Major Chord. You may notice that if you start on the first note of a major scale and put two triads on top of it, you’ll always have a major chord.

An augmented triad is made of two major thirds on top of each other. C – E – G# (we raised the G to make a second major third) make a C Augmented Chord. Augmented chords do not naturally appear in a major key, but they may be added for musical interest.

A diminished triad is made of two minor thirds. B – D – F is a B Diminished Chord. If you start on the seventh note of a major scale and add two-thirds on top, you’ll always have a diminished chord.

Once you know how to play some easy triads, you can start putting them in order to play a chord progression. One of the most common chord progressions in pop music is I, IV, V. What does that mean?

In the key of C major it will go:

Once you master it in C major. Follow the same pattern in starting on some other notes.

Once you know how to make triads out of thirds, you can start reading a piano chord chart to know what chords to play during a song. Sometimes they’ll use Roman numerals like above. Capital letters mean major chords, lowercase mean minor chords, a degree symbol means that it’s diminished, and a plus sign means it’s augmented.

More often instead it’ll use pop writing. You won’t have numbers. You’ll just have chords named by their first note names. Again, capital letters mean major. Lowercase and with a lowercase m mean minor (cm is C minor). Augmented will be capital with a plus. Diminished will be lowercase with a degree.

These tips and explanations should give you a good start to learning to play piano chords. But to master them, you have to practice consistently. Let building triads become second nature to you so that you can play them in any key.

Looking for more advice about how to practice piano? Check out our Music articles for more music advice!